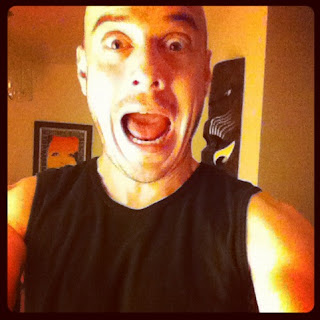 So...Murphy's Law goes like this, "anything that can go wrong will go wrong."

You think things are going well? Mwah-ha-ha-ha!!! (Insert awe-inducing burst of sulfur stench and flame + loud cackling demon.) That's what you thought my pie-eyed young friend. (Who am I kidding you're middle-aged, don't you know better already you pitiful human?!) Well, guess what? Your credit rating dropped 400 points and now you don't even qualify for food stamps because you're score ranks you next to cows on the risk-level scale! Mwah-ha-ha-ha!! (fire burst, laughing succubae)...

Of course, Murphy's was far more concise, but I still prefer mine. Screw you Murphy.  I'm sure you were the idiot who they found in the barn outside of Dublin eating the last of the potatoes while starving babies cried. Asshole.

It's hard to figure out why life goes awry sometimes and Murphy decides to jut his bloated belly and exhale his potato breath into your life, but they (and I believe "they" refers to a group of scientists at Area 51, or perhaps the Mormon Tabernacle Choir...is there a difference?) say that there is a reason and that reason is to teach...although given the looks of ol' Murphy, I think I might have a better chance being home schooled by that clan of Duggars with the 237 kids.  At least they could teach me how to properly iron khakis and feather my hair...but I digress.  Apparently, there's always a lesson to be learned.

And generally there is and usually I'm introspective enough to learn.  But, I'm really not sure why the universe works this way.  I mean, wouldn't it be easier to go back to the idea of the burning bush that just pops up and tells you what you need to do?  Or maybe, in the frozen chicken section at the grocery store, two drumsticks could pop out of a package and do a short sketch on the perils before you and then the smaller drumstick could be saved by a piece of broccoli wearing an orange peel as a vest who catches him right before he plummets to a crusty, golden death in a deep fryer. It seems easier actually, and definitely more fun.  Hey, Universe, if you really are all powerful, I'd like to see you do that.

There are times when I feel like everything is going great - love is in the air, I'm sitting, carefree, writing as prolifically as Santorum bashes gays, lifting my left cheek as money shoots out of my ass like a bazooka and feeling like I fit into this world like Kim Kardashian must feel at the Special Olympics, and then it happens. It doesn't matter if it's a friend lying to you, your identity has been stolen, you owe $1,400 for your electric bill because you put your oven on self-clean for 4 hours every day because of your OCD, or one of many other possible options. Whatever it is, it takes that joyful, peaceful mood you were just in and turns it upside down. Suddenly, you're no longer Kim winning the 5 yard cross country skiing finals.  Instead, you're Kim at the SATs -  stressed out and unable to remember how to write your own name.

It seems so unfair.  Why do these disappointments always seem to come exactly when you need them the least?  I think it's because we can't really enjoy the good times without a dose of the bad every now and then.  The good always seems so good, because we've had to deal with a really disruptive time for awhile and have clawed our way back to happiness, and when  we reach that calm period of bliss again, it seems so sweet.  I get that, I do.  I understand yin and yang, up and down, peanut butter and jelly, love and marriage - can't have one without the other.  I get it. But I always wonder why the good times, when things are so sunny and bright you can almost imagine a bird landing on your arm and strutting around while doing a rousing rendition of 99 Problems (And a bitch ain't one) - why do they always seem to last such a short time?

So I thought about it. And I thought and thought. And then I had a glass of wine and a cigarette and checked my Facebook wall.  And then I danced around my living room to some horrible 80s song that I don't even remember who sang, nor do I care to learn.  I was amazing.  And then I had another glass of wine and I suddenly realized - one, those good times last longer than I think, I just fail to enjoy them as wholeheartedly as I should when they're happening.  And two, who gives a shit about Murphy and his bitchy email from my boss berating me for some stupid, meaningless issue that no one outside of my office will ever be affected by?  I just drank two glasses of wine and danced

So, let me get this straight...I can be happy even when things are bad?  Hmmm...I'm going to have another glass of wine and think about that.

And then, I'm going to make some prank calls and maybe run naked through my apartment complex drunk knocking on people's doors and hiding.  Take that Murphy!
Email Post