Fabulosity: Wrote a song about it. Like to hear it? Here it goes... 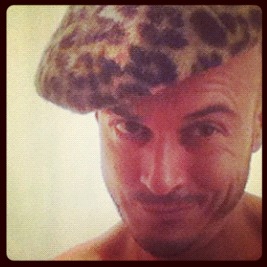 Thanks to everyone on Facebook and Twitter who provided the bolded words below as fodder to challenge me...it's a more formidable task than I thought.  I've put your names at the bottom next to your craptacular submissions...

Is life really random?  Sometimes it feels like it.  For instance, the thoughts that enter my brain sometimes are pretty random, like when I imagine the lives of Zulu teenagers. Do they have their own slang language like the youths of any other country? When the village elder makes them sweep the ritual dance mound, do they call him a douche? Or, when their mother makes them wear long burlap pants instead of a loin cloth saying "why would they want the wildebeest when they can get the milk for free?", do they respond "Thank you mama...this is friggin' craptastic?" and then secretly sew "lil' whore" on the back of their loin cloth and hide it in their head basket until then can get to school and change?  Do they get on the tin can phone and say to their friends "click, click, snap, click, trill sound, animal whoop"? (Swahili for "As soon as I have my ritual clitoral circumcision, I'm running away to Zimbabwe".)  Oh how I love a language based entirely on onomatopoeia! I'm starting my own called Whoosh Oink Pop Poot, the conjugations and details of which will be published in a future blog.

But is that even random?  Maybe I was a tribal teenager myself once in a former life? I do feel a certain altruistic need to sponsor those kids for 25 cents a day, but mostly because I need new pictures for my fridge to make me feel like someone, somewhere-- even if they ARE covered with flies -- loves me.

In all sincerity, I think the randomness of life is the only thing that gives me faith.  I mean, there's something to the fact that my sister and I spent our young lives fighting over the butter hole (the little swirl at the top of the tub of heart-clogging margarine) and neither of us turned out steatopygic.  Well, there was that short time period in the late 80s when my ass fat was harvested to fill the fryer bins at the local McDonalds. But it was during a growth spurt, and they'd just introduced Super Sized and there simply wasn't enough available lard in the area, because of a blizzard blocking the highways. I'd really rather not talk about it. Regardless, they were damn good fries and in the end, the reductive effect it had on my ass has lasted until this day -- it is an exquisite, rare miniature that the ladies in the CrossFit class I've never attended have dubbed my "sassafras". Had my sister not been slow, she might have won every swirl of congealed petrochemicals and been the fast food queen of Interstate 81, exit 150, but luckily I'm a trans-fat ninja and she never saw me coming.

OK, let's consider for a moment that things are not random. What would that mean? For one, it would mean that "Supercalifragilisticexpialidocious", when said loud enough, truly does sound atrocious.  It would also mean that being a chain-smoking, wine gulping writer sitting on a couch composing a blog from a list of random words submitted via a social media site which threatens to take over humanity itself is exactly where I'm supposed to be. I'm an intelligent guy, and at first the idea seemed a little frightening. But I thought about it a bit and, even though it takes a lot of gumption to turn yourself over to that idea, isn't it comforting?  No longer must I think about my own health! No longer am I forced to second guess whether or not to run that red light at night with no headlights on, or steal a neighbor's baby for ransom - it's what I was put on this planet to do and I need to have confidence in that. It's time I had a passion for randomness. That I embrace it. Things are exactly as they were meant to be.  I'm not even going to worry about using new-speak, bad-grammar words like "nite" or "lite".  That kind of anxiety is just not rite.

A friend of mine and I were once talking about Williamson Road in Roanoke, VA and someone, who obviously wasn't listening, or simply had a serious ear wax problem, said "Williamson Road, who's he?"  If my theory proves true, I will meet Williamson Road one day and find that he also sponsors a 25 cent child who beats mine up on the playground.