Me and The Skull & Bones Pussy Squad 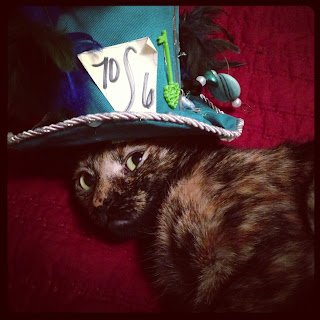 I've decided I'm sick of being me.  Well, maybe not all of me, but I don't know exactly which parts I'm not sick of.  There are funny parts and annoying parts, and smart parts and neurotic parts and silly parts and a bunch of other stuff all jumbled up that makes each of us who we are, and they're all connected.  So, I guess being sick of yourself means it's all or nothing.

So, I've decided to change my name, and thus my entire identity, to Captain Laurent Von Trousselbaum.  Yes, I'm a captain!  Who knew?  I didn't even know until I made the whole thing up a few minutes ago - and look at me now!  Sailing the seas like the pirates of yore and plundering for my living.  Of course the world has changed a bit since the time of the great pirates (and I hate violence) so my waylaying of watercraft is limited to the canals of Long Island (mostly kayaks and the occasional abandoned dinghy), and once in awhile a raft or an inflatable boat off Coney Island, but the spirit of Black Beard lives within me nonetheless.

But, wait a moment.  I'm sorry.  I'm being so impolite and assuming you know more than you do.  I've told you my new name, but haven't properly introduced myself or how I became a captain in the first place. Forgive me.  Let me tell you my tale.  A tale as old as time, or at least as old as thyme, which I believe came a lot later on.

My seafaring days began about three years ago, on a rather tumultuous day that would prove to skew my course abruptly away from my intended path and towards my true destiny.  If I recall correctly - and how can I not as it was the day that changed my life forever - I had thrown my laptop across the room, torn my business suit to shreds with fondue forks and a pair of pinking shears, and packed a single suitcase, leaving a note pinned to my front door saying "I've been kidnapped.  No need for a rescue, but could you please keep my plants watered?"  I gave my keys to the first homeless man I met on the way to the subway, feeling that, having found my freedom, the least I could do was be charitable.  He had no legs, so it was a year later, when I returned for a beard trimmer I'd forgotten, that I found him just making it to the front door of my building - a good bit of luck for me, because my trimmer was just where I'd left it, but bad for my philodendrons, which were shriveled and hard.  As I watched him pull himself up to the third floor landing using only his arms, I scolded him that, thanks to his lackadaisical pace, my plants had died and the apartment now had bad feng shui.   Regaining the philanthropical air that had caused me to gift him my living quarters in the first place, I reminded myself that this was now his domicile and that his chi was none of my concern.  Before leaving, I allowed him to slide in and make himself at home on the floor next to my luxuriously stuffed futon, which unfortunately was a foot too high for him to enjoy, but it made for a pretty picture, so I snapped one with my phone.  "The rent's a year overdue." I said as I closed the door.  "Better get on that."

The destruction of my laptop was the result of a pretty stressful Wednesday, which itself was the cherry on top of a huge sundae of unsatisfying days in the corporate world.  My boss had finally gone too far by asking me to develop and launch a new application to all of our employees using only a stapler and an abacus. "I can't even use tape?" I'd asked.  "No, we don't have the budget for tape.  If you can't do it, I'm sure I can find someone who can lead this team using only a stapler.  Your choice." she had replied, a bit too condescendingly for my taste.  I told her I could do it with a single paperclip and a pen, but we ended up parting ways after I shouted some rather angry words, which unfortunately I did not think of until she'd hung up.  Oh well, while she continues to make 75 cents for every dollar her male boss makes, I am making a killing on recyclables I find drifting out into the bay, so who's the loser now?  Huh? Huh? That's right.

I've never been happier and the work isn't so hard.  I'd always read about pirates having felines aboard and I have to say, they were right.  I'm lucky enough to have four kittens on my crew, each pulling their own weight like full grown cats.  Oh, occasionally one gets its claws stuck in the anchor rope or has too much catnip and jumps overboard, but overall they're a pretty amiable and hardworking bunch.  Fluffy tends to drink too much rum and causes trouble, always fighting with her brother Thor over who gets to sit on my lap and hit the bell, which frustrates me to no end because it's not even a bell, its an air freshener shaped like a pine tree, but they call it a bell and who am I to disagree?  It doesn't make much noise, but it smells like a piña colada, which only makes Fluffy worse so that she starts bothering Patricia, my tabby pirate wench, who's always in heat to begin with and hard enough to handle without Fluffy's drunken taunts. I guess it's all just part of the job when you're a captain. And cats are so much easier to manage than my previous crew of ferrets, who not only smelled and bit my ankles incessantly, but couldn't reach any of the instruments without an intricate mess of plastic tunnels which, frankly, made it hard to get to my coffee maker.  And anyone who knows me knows that when I wake up without coffee, the last thing I need is some ferret running by in a plastic ball acting all cheerful.

The Skull & Bones Pussy Squad, as they named themselves, is very adept at plundering, which makes it worth dealing with all their squabbles.  Yesterday, on my way back from a giant haul of plastic bottles in Merrick, I found two containers of pale blue eyeshadow, a recyclable can of Four Loko and a faux red fur coat lying totally abandoned on the beach.  Luckily the Pussy Squad was able to retrieve all this booty without disturbing the hooker and her john, who were unknowingly having sex a few feet away.  I love to acquire treasure, but I do hate to be a nuisance!

After that, as I rounded the bend near the park, I saw a young lady in a kayak, absolutely flaunting a giant Poland Spring bottle as if she were in friendly waters. I pulled up alongside and, rather than using force, which I have refrained from since a seemingly friendly older woman beat me nearly to death with a Le Sport Sac, I let the kittens do what they do best.  "Oh, how cute they are!" she squealed, letting down her guard.  As she reached for Patricia, who was arching her spine to show the lady her ravenous backside, I snatched the Poland Spring right from the unsuspecting woman's hand, shouting to Thor and Copernicus, who swiftly paddled us out of reach and into the current that led us home to Red Hook.  It was a lucky day and we all pulled out our rum flasks and toasted to our good fortune and to the giant green lady with the torch to whom we pledge our allegiance and our faith.

The crew and I are back at the home we've made below the bar at Hope and Anchor restaurant.  How the staff hasn't spotted us or our campfires these many years is a mystery to me, but I am grateful for their ignorance as it is a cozy place and there are limes enough to keep us all from catching the scurvy.  As I finish typing these last words, illuminated by the glow of the LEDs in the bartender's sneaker soles, my fearless Pussy Squad is bedded down in a giant furry ball of noses and paws and I am comfortably wedged between the warm feet of bar patrons and a 25 pound bag of mixed nuts.  Does life get any better than this?  I think not.

Would I go back to the corporate grind, with its reliable paychecks, schedules and comprehensive medical and dental plans?  Some days, when the wind has died, or the water is choppy and Thor and Copernicus are struggling to keep the boat steady so that Fluffy can make me a daiquiri, I am tempted.  But, once a pirate, always a pirate and, though I live day-to-day, I live for myself under my own direction.  Maybe it's not the most upstanding career choice.  You may think of me as a common thief, but I promise you that these kittens and I are nothing compared to the wheelers and dealers in the stock market.  We only want to live as free as the day we were born, without the weight of the world and its demands upon us - to sail and clean the beaches or chew on a pile of catnip and simply live.

Well, it's time for some shut eye maties.  Good tidings until next we meet.  And for those of you still sailing the treacherous waters of capitalism, may the torch lady deliver your fortune unto you in her own good time.  As for me, I will dream with a smile tonight, knowing that tomorrow will bring much adventure and not a single un-welcomed demand from man or cat.  For I am the captain and this is my domain.