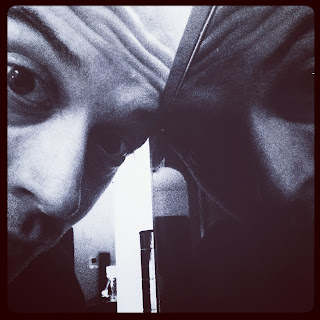 It's a funny thing, having perspective.  Imagine yourself now.  Maybe you're stressed, you have trouble in your relationships, health issues, family problems, work tension - whatever.  Right now, it seems overwhelming and you see no end in sight, because you can't predict where this rough road will take you.  You know that you've had tough times before and have always come through them, but this time, you have your doubts.  But you keep going and each day takes you another few feet away from the dark until you're ten miles away and the shadows are behind you - not totally gone, but they're at your back and the sun is warming your face.

[my internal voice] You know you should have finished this last night when you were feeling good, because this really sucks. Read the rest of this shit, and I'd recommend getting yourself a vomit bucket. Every time you stop something mid-way and come back to it, you hate it, and why shouldn't you?  Who the hell are you to think you have anything figured out?  Writing a blog?  Really?  Like anyone wants to read what your fucked up mind thinks!

I kept thinking I was already at the ten mile point where things start to make sense.  But, you really don't know you've arrived until you get there.  And it can happen in a week, or a day.  Just last month, I felt like the world was still spiraling around me, a little out of my control.  I have a massive capacity to handle stress, and I think I'd fooled myself into thinking that things were better than they were.  Maybe we all do that as a way to keep ourselves sane.  But, the strength that it takes to carry the weight of your worry around can also work against you.

Yeah, you just woke up feeling like the world was pointless.  Strength?  Failure.

It's like you're walking down the road and you encounter a problem, right in your path.   You can't sidestep it and you can't get any further until you deal with it, so you pick it up and put it on your shoulder.  Then another one blocks your path, and you stack it neatly on top of the first one.  And so on and so on until you're carrying a massive pile of worries on your back like a pack horse, all fitted together like Tetris pieces so they don't fall.  But, just like our physical muscles, our mental ones can become strained and, eventually, they give out.  You just can't take another step under the weight. At that point, my first instinct is to just stand still.  Very still.  I won't look at the problems for fear that I'll lose my balance.  Just stand still and look straight ahead.  But you can only stay still for as long as the world will let you.  And when you try to take that first step on your weakened, wobbly legs, you trip and all of those worries come tumbling down until you're battered on the ground and tangled in the jumbled wreck of your stress. Hope is still there, but it's far beyond your reach.  You either struggle and stretch to grab its hand, or sink deeper into the pile.

The only other option is to take each package of worry down from the pile one by one, dust it off, untie its ribbon and look inside.  And, in the end, it's what we all have to do anyway.  Analyzing our hurt, stress, fear and worry and understanding it is the only option, because you can only have so many breakdowns, or wallow in self pity for so long.  Some can do it their whole lives, but you can see its wear on them.  Their drawn faces may smile, but their eyes are tired.  They've struggled and fought to follow dreams that were blocked by the wreckage of their inability to deal with the world and themselves.  They always have regrets.

Hey "Jesus" - do you need me to help you nail up that other hand?  Or do you want to feel like a failure because you're not even good at crucifying yourself? I mean, I can help you finish - a few hits with the hammer and you're done - but just be prepared to be disappointed that no one rushes to help you in your state of martyrdom.  No one wants to hear about it again.

Most of us can't keep going that way, so eventually we analyze and cope, and that's when we find the perspective that I mentioned earlier.  Suddenly, you realize that you've reached the ten mile point because you start to feel like you're walking downhill instead of up.  You may still be carrying all the weight, but it no longer feels as hard, because it seems lighter and easier to balance.  It makes it feel manageable to find a safe place to unpack all those packages and leave them behind.

You know what?  You're a fraud. What's the last real accomplishment you've achieved?  Listen, there's not a single special thing about you and you should just stop trying.  Just realize that your dreams of making something big out of yourself are just the unhealthy results of low self esteem and needing too much to be liked, and not something greater.  In order to be a voice of the people you need to have a voice that people want to follow, and, I don't mean to offend, but someone would have to be masochistic to take inspiration from you.

OK. I've been trying to ignore you for several paragraphs now, but you've pissed me off.  You don't mean to offend?  I'm sorry sister, but that's exactly what you meant.

Well, you're so easily offended, I could just breath and you'd take offense.  Should I just stop breathing?  Is that the level of sacrifice you need to prove that I care about you?

No, I just want you to shut up, you pathetic, negative, annoying and, dare I say, badly dressed asshole.  You're the one who told me to wear turtlenecks.  A bald man should never wear clothes that make their necks look shorter.  You literally do look like a turtle. It's like fat men wearing pleated pants.  It's a no-no.  It's like the French say, a faux-pas (which is so much more fun to pronounce "fox pass", preferably in an Alabama accent.)  Well, it's like anyone wearing pleated pants really, but you get my point!

I told you to wear turtlenecks?!  Um, I seem to remember it differently.  I think it was you with the bohemian, Steve Jobs complex, not me.  And, since you were the one in sixth grade who failed to see the possibility that you'd be bullied senseless if you got a perm, I'd place all fashion-related criticism at your own feet.

Really?  Don't we share feet sir?  And I only got a perm because I thought my hair would still be straight, just fuller.  I didn't realize it would look like a silky, shiny brillo pad. And even if I was obsessed with wetting it and playing with my little ringlet curls in the bathroom mirror, I hated it.  But, you didn't have to keep reminding me how stupid it looked! And, remember, they made fun of your crew cut idea too.  So, what's your point?  And what are we even talking about?  Are we talking about perms? I said, "good day sir!"

Yeah, but I gave you that really great joke when that stupid girl made fun of your buzzed head.  You said "My hair will grow back, but you'll be that ugly forever."

Yeah, that was a good one.  I have to admit it.  And, she IS that ugly to this day!  It's what happens when cousins procreate.  Poor, dirty, smelly thing.

LOL.  But you know I'm not really laughing out loud. No one does that anymore.  Do you realize what it takes for people to laugh these days?  It's like you need to have a Scorpion wearing a top hat crawl out of someone's ass singing Beyonce before people even smile.

I know!  Isn't that the craziest thing!?  I used to refuse to use LOL, because I was like - "That's a giant lie.  I didn't see a midget bite an old woman's nipple around here....what's so damn funny?!"

A midget biting a nipple!  THAT I would LOL about.

I know, right??  I should write that down somewhere I'll remember it. I think I could make a YouTube video about that, or maybe just set it up and Instagram it.  Because, as much as your amusement is my obsession, just laughing with friends isn't real enough anymore.  I need to document it in pictures, shared with family and dozens of virtual strangers for it to feel...you know...valid?

I totally get you.  We're so alike.

I know you are, but what am I?

A Pee Wee Herman joke?  Really?  (I know you are but what am I...infinity)

I love you too my little nasty, negative inner voice.  You're a real pain in the ass most days, but you keep me honest.

I know.  And you keep me disappointed.