Quitting Smoking Episode 1: Make it look like a donut or a giant penis. 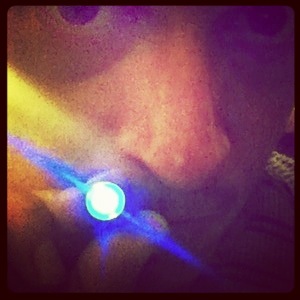 So...I'm trying to quit smoking.   Not nicotine specifically - just the ingestion of it via billowing, noxious smoke clouds.  I've decided that instead of smoking in the traditional fashion, I'm going to opt for a more futuristic approach - electronic cigarettes.  Like I'm Darth Vader working down at the bowling alley.

"Hey kid <deep mechanical breath>, you want fries with that grilled <deep breath> cheese?" he would say, holding a spatula in one black, leather-gloved hand and an electronic cigarette in the other.

I can go on and on about these cigarettes.  I've read the FAQs, carefully reviewed the instruction manual and know what it means when the blue light at the tip flashes, and also that the blue light is specifically designed to NOT duplicate the burning tip of a cigarette because these are 'not cigarette replacements, but an entirely new way of smoking."

<scratches head> Then why make it cigarette shaped at all? Make it look like a donut or a giant penis.  The instructions would have to be updated a bit, but it would likely be very popular.

"Oh look honey. Here it is! <fumbles through the instruction manual>  When the left ball flashes blue 5 times, it means you've been smoking it too much and you need to stop for a minute or two."

Like I said, I could go on, but I don't want to sell the merits of these devices regardless of how amazing they really are. I just want a damn cigarette. I even literally had a mental meltdown today from this transition to electronic drug delivery.  It was as if I was Darth Vader, but rather than being brought to life by James Earl Jones, I was played by Joan Crawford having her period.  I'm more machine now than man.  Twisted and evil, apparently.

I have since calmed down and am ready for day three of this.  I am pretty amazed at how well it's going, considering how long I've smoked.   I need to keep reminding myself how proud I am of that achievement, to prevent me from spiraling into a place where I'm checking the corners of the apartment for spare bits of tobacco amongst the dust bunnies to throw into a candle and inhale.  I also need to remember that I'm still having a honeymoon period with the cool black case the electronic cigarette is stored in, which charges the battery and, best of all, lights up, making the whole world think I'm carrying around a bomb-- or a thermal detonator if I'm going to continue the Star Wars theme.  I wonder what will happen when the little blue light stops entrancing me and I realize that in fact I'm just carrying around a little plastic box filled with cherry and coffee flavored nicotine water and a battery?

So to close this first installment in a series of blogs chronicling my rebellion against the evil tobacco empire, let me just say that, even though electronic cigarettes may not prove to save me from the evil grips of smoking, for now, they are my only hope.  (ba dum dum.  "Thank you ladies and gentleman!  Don't forget to tip your waiters!")
Email Post