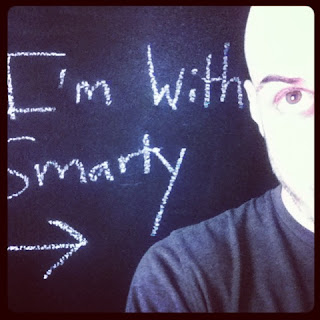 So, let me start by saying that on today, day 5 of switching to electronic cigarettes, I have had a few actual cigarettes.  It was because of stress.  And, when it comes to stress, I'm like a generator, mixing together the raw materials of over-analysis and pure, illogical worry into the powerful fuel of stress.  And when it comes to containing all that chaotic, combustible mass, I'm like one of those Glad-brand, super-stretchy garbage bags. I can hold way more than I'm supposed to but, sooner or later, the Goddess of Physics pulls back the sky, looks down at me and says, "Um, yeah.  That's about it. Spew or explode.  Those are your choices."

I think I'm addicted to it.  Cigarettes, definitely.  But now I've realized that I thrive on stress.  I don't think I understand how to live in the world without it.  Apparently, the excess happy juice that the cigarettes generated helped.  With just this futuristic nicotine mist to replace it, I've deteriorated into a leaky, dollar store garbage bag (called Glade Bags or Hufty Bags or something like that), leaking shit all over the floor.  If you saw me, you'd swear to never buy my brand again.

I can't blame it all on trying to quit smoking, but it's definitely an accomplice.  Actually, I have no one to blame but myself.  I don't know why, but in my life, I've let people push me around and took shit I should have never taken, and then talked like the kind of guy who would never let himself be treated badly.  I've set up unattainable standards and goals for myself, just so I could beat myself up when I was not superman enough to perfectly adhere to and complete them.  I've worried about things I couldn't control, and then worried about my inability to control them.  That made me feel even more out of control, so I worried about things that I could control for other people instead.  Then, when it didn't help them, I felt bad that I hadn't done a good enough job in assisting them, even though I was never asked to.  If you need a description of how repeating this kind of behavior over and over again makes one feel, it's pretty simple - like shit. And once you become caked with shit so that it covers your entire body, you can't help but accidentally rub off on the people and things around you.  Your options are staying still so that you don't get shit anywhere, or clean yourself off.  And in order to do that, you need to move.  You need to stretch your arms to the faucet, raise your shit covered legs up to step into the shower and lift your head to let the purifying water wash over your eyes so that you can see what you're doing.

I've said a lot recently that I can't focus.  That it seems like my thoughts are swirling out of control.  I see one behind my eyes, a little stream of light - a thought - rushing into the core of my brain. I follow it's glowing trail and keep my focus on it so that I can't lose it.  The thought means something.  It is something I need to see so that I can learn, so I rush after it, trying to see where it leads.  But, just as I've run after it, almost to its destination, a bright light rushes past me in the eastward direction.  It says "Follow me!  Let's go to the movies!"  Or sometimes, it says "Look here! Let's make margaritas! Ay! Ay! Ay!"  Or "Maybe a beer would be good?"  Or sometimes, it says "Have you thought of a new couch?" or "Let's talk about YOUR problems instead."

It's a very tricky situation because my brain is smart and pretty compelling.  It knows me very well.  It knows what I will fall for, and it knows what it doesn't want me to see.  So, it sends up signals to divert my attention.  If you look hard enough at it - if you're capable of cleaning the shit away from your eyes long enough to catch a glimpse of your brain's mechanics - you see it for what it is - addiction. It's like the crackhead that has lost his job, his friends and his money to the drug, but goes out to get some more.  If you really want one, a justification is always available.

My addiction started from being too afraid to say what I wanted.  Whether it was "Get your fucking hands off of me before I break your nose!" or "I'm not happy with this because...." or "I really want...." or "I'm great!"  If you don't ask, you'll never receive. And if you don't receive, and you didn't ask, then why in the hell are you pissed that someone didn't give it to you?  It makes no sense.  And, if someone doesn't give you what you wanted and were blissfully unaware of your tumultuous cyclone of moronic and paranoid thoughts, it's not because they are ignorant or insensitive.  It's because they're not mind readers.

I was afraid to say what I wanted, because I didn't want to inconvenience people or annoy them  What the hell?  If something annoying is happening, someone is going to get annoyed, so why should it always be me!  I'm tired of being annoyed and feeling hurt.  And I'm tired of taking on other people's emotions so that they don't have to, or just because I don't want to have to deal with them dealing with them on their own.  I need to drop the need to control my surroundings as a sign that everything is ok, because people must be frightfully tired of me being oversensitive.  Holy crap, I would be.

I'm right here and right now and I'm making changes.  Every time I see what my brain is up to, or someone points it out to me, I have gained another weapon against defeating it's patterns and its ability to control me.  My ability to control me, rather. Because talking as if my brain is responsible on its own is like blaming guns for mass shootings. In both cases, the issue at the core is a mental illness that's not being dealt with.

My brain even tried to convince me recently that I didn't deserve any of the good things in my life.  It wanted me to feel unwanted, because now that I felt wanted and happy, and steadily and positively moving towards the future, it didn't know how to generate the stress it thrived on.   Just as George W. Bush handing the presidency over to Obama did to comedians everywhere, my happiness left my brain without any good material.  There was nothing stressful happening, so it needed to make shit up.

But now I see it for what it is.  It's still trying.  For example, several times while writing this, my brain offered up "You shouldn't say that - it's embarrassing!" and "Hey, I think you should go to Pottery Barn's website to look at curtains!" and "Tomorrow is going to be so stressful at work, you know that right?  There's probably no point in enjoying this evening."

So yes, I'm trying to quit smoking.  And yes, on top of it all, I'm pretty sure that I'm having some sort of mini mental breakdown.  But, I think it's really more of a breakthrough that just feels like a meltdown.  Something is definitely breaking, but I have a feeling it's all the old crusty shit on my brain, just falling away.

So, for anyone who was visiting this blog for inspiration to quit smoking, I apologize in advance.  I am hoping that not everyone has my same experience.  And you know what?  You won't.  I'm sure yours will be just as beautiful as you are.  Because we're all different, and no one can ever have the same experience, or act in the same way, or believe in the same things in exactly the same way.  That's called cloning and we all saw how that went.  What I can tell you is that addiction is addiction is addiction.  And some are worse than others.  I thought tobacco was bad, but I've only been smoking for 16 years.  I've been stressing for over 30.

Just like quitting smoking, I've got to take it day by day.  Over 5 days, I've had 5 real cigarettes.  Thats at least 30 less per day than a week ago.  That's progress. So what that I fell off the wagon for a day?  I won't go back to smoking for good.  I know that now.  I've reached that point.  And the same goes for stress and worry.  It'll take time, but now there's no going back. To do so would be to accept that I am truly stupid.  And I may be an oversensitive, worrying, depressive control freak, but one thing I am not is stupid.

Now if only Mayor Bloomberg would pass one of his special Caesar-esque bans or taxes on stress, I might get this done a little quicker....
Email Post