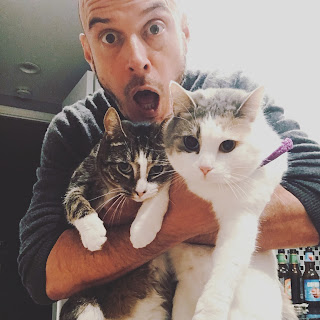 When I can't think of what to write, apparently I write dialogue between estranged animals. Enjoy.

Elsie heard a knock at the door—rapp, rapp, rapp—slow, steady and polite. It must be Herbert. But, why was he so early? She hadn't even finished the dishes. Elsie grabbed the closest lint roller and picked up as much fur as she could from the couch cushions, then swiped all of her unopened mail into a kitchen drawer. Finally, she opened the door.

"Herbert! Hi. Sorry it took me so long to get to the door. I was in the litter box." Elsie helped him in, taking a few of the bags that were hanging from his forearms, full of what she couldn't imagine. All she'd asked him to bring was a box of Tender Vittles, because she'd noticed she was running low. But, Herbert always did like a surprise.

"Thanks Elsie," Herbert barked, in that gruff tone that still made Elsie arch her back and raise her ass instinctively even after all these years. She hated that.

"Herbert, keep it down," she said. "Frankie down the block will hear you and come in here, eat all my food and never leave. You know those big ears of his."

"Yeah, yeah, OK," Herbert grumbled. "Can I have some coffee?"

"Do you really need it? Your tail is wagging like crazy already. Everything ok?" Elsie poured a bit of coffee into a bowl, added two teaspoons of sugar, as she remembered Herbert liked, and set the bowl on the floor. "This is new laminate flooring, so try not to spill."

"Yeah, everything is good with me," Herbert said. "I'm more worried about you. Do you realize this is the first time this week that we've seen each other?" He lapped up some of the coffee and waited for a response.

"Well, it's because you always show up early," Elsie hissed, then, controlling herself, added "But you know I'm always losing track of time. If it's not the scratching, it's the preening, and before I know it, Wheel of Fortune is over and I haven't gotten anything done."

"I know Elsie," Herbert said, then licked his balls. "But, everything I know about your kind tells me that when you start to hide, you're either sick or something else is wrong. Back in the day, you'd be so excited to get out and visit friends that you'd be meowing at the kitchen window."

"Well things have changed Herbert," Elsie mewed. "I'm not the same girl you knew. I hate the world. It's so full of the feral and rabid types, and everyone is just so...catty I guess, even though I hate that word." She set the bags down on the counter then, seeing her favorite toy behind the sugar canister, "Oh, there you are!" She batted the toy around with her paws as she continued, "I'm just having trouble finding joy, if you want me to be honest. But, please don't make fun of me! I feel bad enough, what with being fourteen and never married."

Herbert yelped. "Well, I'll assume that was a dig at me, and just ignore it. And, a much more interesting topic to talk about than our failed relationship is this amazing plan you have for finding a husband without leaving your condo, particularly because it doesn't smell like you've changed the litter in weeks and there are saucers of sour milk all over the place. I can't wait to hear about this magic plan, and even more so about said Prince Charming who enjoys smelling your feces. I'm all ears. Literally. I'm a Bassett Hound." Herbert curled up his lips into a smile.

"Fuck you Herbert." Elsie swatted playfully at Herbert's jowls and then placed her paws on his shoulders, gently kneading. "And, I have changed the litter box. But, it's that recycled newspaper shit they sell down at the bodega. I'm convinced they make it themselves out of old lottery tickets and loose cigarettes. But I ran out of litter, and Duane Reade was closed.  So you do what you gotta do."

"Which is why I brought you a few gifts." Herbert began unpacking the bags. "First, the Tender Vittles you wanted, but then also..." he paused in anticipation and then quickly revealed "an economy pack of Fancy Feast and a bag of pine litter!"

Elsie chirped and chased her tail. "Herbert! Why did you go to all this trouble?"

"But wait, there's more," he said. "A new scratching post, a pack of mouse toys, and one more thing." He pulled out a small, ceramic food dish, two smalls chips around the edge and glaze that had once been bright blue. "Do you remember this?"

"Where did you get that?" Elsie asked. "I threw that away."

"Why would you do a thing like that? Well, I guess you were always digging in the trash, so it makes sense. But, I got rid of that for a reason." Elsie batted nervously at the mouse toy.

"I saw it in the trash and couldn't let you get rid of it. It was too special to me. It reminded me of when we first got together and how much we struggled and how tough things were...and how poor we were." Herbert laughed. "It made me think of how far we'd come and how amazing you were."

"Were?" Elsie teased and, after a pause, "Need more coffee?" She turned to pour more, but Herbert stopped her.

"No, I don't want more coffee and don't try to divert my attention and avoid the conversation. You might like to think you have nine lives, but you don't. And you're spending a lot of time wasting this one." Herbert said.

"You know what Herbert?" Elsie hissed. "Fuck you. Seriously."

"No, you wait a second. I'll calm down and talk about this, but you need to hear me out." Elsie paused and waited for Herbert's reaction. When he remained silent and his tail had stopped wagging, she continued. "I don't want your help. I don't need your help. And, frankly, advice coming from you makes as much sense as...when dear Mrs. Gibbles crawled into that out-of-town traveling man's butthole...deliberately. Leaving fourteen gerbil babies to starve when she suffocated! Like, it's kind of insane. Do you even realize how much of a hypocrite you are?"

"No, you come on. And that is not an invitation to start humping my leg." Herbert withdrew.

"Herbert, there is one thing that you can't get your through thick skull. And I am getting SO tired trying to constantly get you to understand. I read a fucking book recently that said, and I quote, 'If you have to keep trying to get someone to understand what it means to be good and decent, then walk away.' And I feel like I'm always having to catch you up. I guess what they say is true. Cats rule. Dogs drool."

"Elsie, if we're going to have this same conversation, I'm leaving." Herbert said, nervously biting at a fly on his hindquarters.

"Herbert, we only have this same conversation over and over again because you never choose to listen to anyone else but yourself and you can never, for once, get over your stubborn hound ass and do something about it. It's like you don't care, but my prance keeps you coming back. After awhile, it not only feels demeaning, but annoying."

"Elsie. That's not fair. You expect too much. I'm a really private person. I'm like an onion. Once you start peeling my layers back...."

"You do know the punchline to that joke don't you Herbert? That once you start peeling back the onion, you start to cry? Yeah, pretty much." Elsie's back arched. Her tail's flicker showing her discomfort. It was fight or flight. And soon. "You lied to me Herbert! You knew how much I loved you and you didn't care! You just literally didn't care. Do I really need to start quoting Alanis Morisette for you? Because, right now, I feel like —even though she's not dead — that I've channeled her spirit. And all You Oughta Know is that What I Really Want is Ironically your painful death, because I see Right Through You.  Yet you are Forgiven." Elsie relaxed her back and turned towards the sink. "Honestly, I just only ever wanted to know I mattered. But, eventually, You Learn."

"Elsie. I'm so tired of this. I don't even think I did anything wrong!" Herbert barked.

"Wrong!" Elsie hissed. "For fuck's sake! You told me you were a single baker, who lived alone and dreamed of a house in the hills with a bowl for each of us. Instead, you have two wives and live with six conjoined twins behind a dumpster on Utica Avenue. How am I supposed to rectify this in my mind?"

"Elsie, I've told you at least twice that they were mating and were only temporarily stuck together. And I do dream of the hills." Herbert said.

"I'm so tired of you. Can you please just leave?" Elsie said.

"Fine. Whatever. Your choice." Herbert growled. "See you tomorrow?"