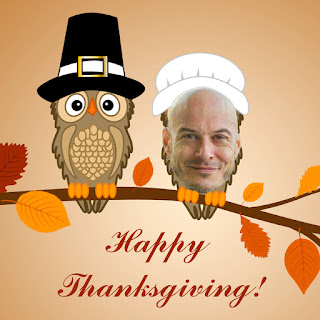 It's Thanksgiving—the day on which we've been trained to believe that dozens of puritanical people in bonnets and buckle shoes got together with a bunch of half-naked Native Americans and they all shared a feast. And supposedly, no one died of botulism even though the roast elk had been wrapped in corn husks and sitting on a tree branch for two weeks prior. I always thought it would be far more exciting if it featured a sex scene—maybe Big Elk Thunderheart takes a liking to Goody Eliza and rips off her tights behind the shit shed. But, it's a pretty story as it is. And who doesn't love a grape vine cornucopia filled with seasonal gourds and inedible corn? It's a good thing.

And the duty of every American on this day (as we learned in kindergarten, just before we learned our home addresses and just after we learned the pledge of allegiance,) is to be thankful for what you have—and forget what you have not, because to think about what you have not just makes you a big party pooper at the Thanksgiving table, and then they'll make you eat all the green bean casserole that everyone says they like, but secretly knows is awful. Green bean casserole is like the longest running holiday gag since Santa giving you coal. I was over 50% naughty some years, and...no coal.

This year, it'll be easy to assign the green bean casserole. It goes to the first person to say "I voted for Trump." Those people are the ones who make the casserole anyway. #sadists

In the midst of writing this, I ran it by a friend—a progressive lass with a good heart. She loves green bean casserole, but hates sweet potatoes with marshmallows, which I love. So, please, replace "green bean casserole" above with your own despised dish. I also recommend creamed onions, if you can't think of one.

But regardless of what really happened all those years ago, the idea that people of very different backgrounds can get together and share a meal, without fighting, is a good ideal to strive for. I don't know why we only try this for one day a year, but at least we practice on an annual basis.

We've all been fighting lately, and for good reason actually. But, for once, we're fighting because we're all thoroughly involved in the future of our country. Unfortunately, both sides think that the other is thoroughly stupid, but we're involved. And, for that, I am thankful. Let's see if we can all sit around the table without fighting today. It'll be tremendous if we can. Yuge. (By the way, you're stupid.)

Beyond the election, there are a lot of other things I've been struggling to be thankful for this year. It's been a year with a lot of ups and downs. I've experienced the peaks of love and hope and excitement for the future, and all their opposites. Extremes all around me that have left me wishing for a boring middle ground. But, I know myself, I'd never be happy with middle-ground anything. I read something recently about Scorpios (my sign) that said that life is "all or nothing" for us. It's true and it's both a gift and a curse. But, in the end, I am thankful for all of the very deep experiences that living life aggressively brings. One thing is for sure, I'd hate to be normal.

Reflecting on what it is in this past year that I should be thankful for, I think it boils down to a few things:

2) Honesty is the only thing that really matters. Nothing else can happen without it...not love, not friendship, not peace.

3) Remember who you were before the world started throwing shit at you like a crazed monkey, and  love yourself even when the shit has stained you a bit.

4) Friends that see the real you and love you even more for it are the ones to set your focus on.

Lists like that don't come from an easy year. But, now that I've written them down, I can see how truly magnificent a year this was.  If it had been a movie, it would have won a number of Oscars, including Best Picture, and Best Actress to Meryl Streep for playing me. And aren't our memories, the memories we actually keep and replay for ourselves, really just the really good times and the really bad ones? The stuff that makes the plot of life progress? The drama, tragedy, suspense and rom-com of it all?

If that's what life is, I can say sincerely, I'm very thankful. As is Meryl, and the studio.
Email Post