Brought to You by the Amish and Thinx Panties 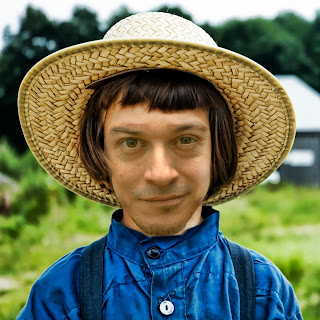 Our sponsors would like you to know that this blog was fueled entirely by months-old Christmas hard candy. Thank you. **Handmade Amish Christmas Jewels is the official sponsor of this blog, but in no way agrees with anything it stands for. Visit us in Intercourse, PA. #buttonsforever #zippersnever

Today I saw a woman in an enormous, knitted prairie-maiden bonnet, wearing a tailored herringbone coat with purple rain boots. I thought she was amazing.

I also saw a tiny woman, all in red, who couldn't stand up straight due to osteoporosis, or possibly because her muscles are just stiff from spending years staring at the ground for too long. Or just heavy hats. I guess either is just as likely as osteoporosis. I thought she was sad.

I saw a grey-haired gentleman in coveralls walking with crutches, but not on them. He was just gleefully pointing them forward and tapping the ground with them all willy-nilly as he walked—as proud as a peacock. I thought he was admirably eccentric.

I got a cavity in my tooth filled today, and I don't have much experience with novocaine, so I ordered a cheeseburger and fries afterwards.  I basically had to just ball it up and shove it into the uncontrollable, wind-tossed saliva factory that was my mouth. I thought I was funny.

So, I guess life is lots of things, and funny is one of them.

Let me segue to say that anyone reading this who actually knows me, knows that I did NOT in fact get a cavity filled today. It was several weeks ago. When I started writing this particular blog. In an emotional galaxy far, far away.

Writing about yourself (honestly) is hard. And, often, when I come back to continue something I began writing the day before, I realize I started it on a Golden Girls day, but have just had a Locked Up Abroad-kind-of-day, so things are going to get weird. Sometimes it works.

But sometimes it's like, "Today, I was on the subway and I saw this funny, little old lady totally caressing a fish like a baby. She told it three times how pretty it was, and then went to give it a kiss—and I clutched my temples and dropped to my knees, screaming and wailing, "what is the meaning of life??!!??"

In those cases, I just put the writing away for a bit and come back to it. However, please know that the Christmas candy is even older now, and that I am still eating it—despite the aforementioned cavity.

Due to cost increases, we will now have a word from our second sponsor - Thinx Panties:

"Are you on the subway girl? You just got your period, didn't you? And now there're delays? Fucking MTA. And white pants? Girl."

"It's OK, I'm wearing Thinx - they can absorb TWO tampons worth of blood."

Umm, I'm sorry. What? So, you're just going to sit in blood in your underwear? And then just accept that you now own a pair of permanently stained panties? Or do you just throw them away?

"At Thinx, we leave it up to you, and your own personal comfort. But, rest assured that our panties are cursed by our own proprietary breed of witches to hold YOUR menstrual blood...like magic!"

Ok. Well, thank you Thinx. I think that's enough for this time.

Sorry, that was weird. Anyway, as I was saying, it can be difficult to continue writing from one day to the next, because perspectives can change so quickly. For some people, it seems to be as simple as:

"I had a bad day today, because Alicia looked at me funny at work. I hate her."

But, then on Tuesday it's all like, "Alicia said hello twice today! I love her. She's SO compassionate."

But, it's never that simple for me. My version is like this: "So, I'm totally getting annoyed at Alicia today. I mean, she's totally a stupid twat (albeit pretty and a nice dresser,) but why do I care? What does Alicia MEAN to me?? What lesson is she teaching me?"

"No, Alicia is just fucking annoying to everyone." And then I go get a coffee.

Thank you again to our sponsors.

What I was saying is that any of those options for dealing with the situation are possible. And each has consequences. The easiest to do when we're frustrated is to get nasty, but it also has the highest consequences: I could hurt her feelings; I'd feel bad about it after; Alicia might get my ass fired, etc.

And the hardest, but most satisfying option by far, is simply finding a way to tune her out without even allowing myself to get frustrated. Because, why should she have that much power over how I feel? I want to try to just let Alicia be Alicia (tawdry little hussy that she is) and then ask myself, "do I think Alicia is a tawdry hussy, because I'M a tawdry hussy? Hmmm."

Of course, this philosophy gets far harder to adhere to when hearts get involved, because all of the emotions are far more intense. I mean, I get to just walk out of the office at the end of the day and yell, "Bye Alicia!" and be along my merry way.

But, what about Jonas, my pretend boyfriend? I care about Jonas, even though he's pretend and doesn't have a job, nor do chores, and, because I do, he can hurt me even deeper than most. But, what's he going to feel like if I choose not to be honest with him in response? Or if I scream at him?  Or even if I put on headphones to drown him out? He won't pretend to be happy, that's for sure. Then again, Jonas is kind of a bitch, so it would be hard to tell.

Actually, on second thought, Jonas is now your pretend boyfriend, not mine. #NoGiveBacks

And the reason it can all be so difficult is because, sometimes I need to say things to people I like or love that they don't want to hear. And, sometimes, I need to ignore things that I'd love not to ignore. Sometimes I need to pursue things that aren't very smart in order to learn, and sometimes what I think is the smart choice isn't. I've experienced pain and the even worse torture of having caused pain, so I try to make choices that avoid it.  I'm trying to love what I might have once thought was unlovable in myself and others.  And sometimes, I'm failing miserably.  Or, am I?

Whatever it is, it's not going to be finished for a long time. Unlike this blog.
Email Post