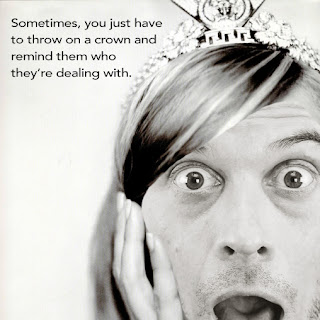 I wailed.  I wailed like a motherfucker as I drove out of the Holland Tunnel. This relationship had become an addiction - one addicted to the pain of the other who wanted nothing more than to please. I had no capacity for anything but pain in that moment. My body and mind had been trained that pain was normal and that the love and attention that came after was worth it. The betrayal that would come would be nothing compared to the withdrawal from this toxic love.

But, I was in charge the whole time. I created the relationship and, in fact, I ended it. I had begun creating its end when I decided to leave the job that provided 95% of our income.  What I masked to myself as "a chance to work on my creative endevors," was really a call to bring the curtain down. This operation would no longer receive funding. The lesson was over. My emotions and my empathy had always been a weakness in this drama I had written. Benefit of the doubt was handed out like Vicodin to a pill head. With my heart and mind constantly at battle - one army's flag emblazoned with "Trust!" and the other's with "Run!" - my soul took over the job that neither could handle, and fashioned my escape.

And why did I start it? This exquisite pain? Oh, there were many boundaries I needed knocked down, and many I needed to erect. (I just giggled that I used "erect", like a twelve-year-old.) The hardest thing in the world to do is to be grateful to someone who willingly sought your pain. But when you are willing to accept the necessity of it, and that you were always in charge of it, you can look at them simply as "actors" in an award-winning play you wrote.

I started it, because the love of my life was gone, and I felt awful. She was my wife, well is still my wife (because divorces between gay men and their wives can take awhile.) I started off being in the closet because of fear and self-loathing, and then tried to continue it, not out of fear, but because I wanted to in order to live my life with my best friend. It worked for a long time, but that kind of love requires everything you are and everything you have, and I couldn't offer that as a "straight" man. And she deserved(s) more.

As the years went on, and I became resentful of not being able to be what I needed to be, I used to listen to Love and Anger by Kate Bush and just cry:


It lay buried here, it lay deep inside me
It's so deep I don't think that I can speak about it
It could take me all of my life
But it would only take a moment to
Tell you what I'm feeling
But I don't know if I'm ready yet
You come walking into this room
Like you're walking into my arms
And what would I do without you?
https://youtu.be/xyEHKGDSg5I

I couldn't describe the absolute split I felt between the desires of the life I wanted, and who I really was, better than that.

And I felt like the biggest piece of shit in the world for not making it work. And for not being able to change myself. And for becoming a resentful, angry person at times. And for not appreciating the good times enough. And for expecting that it would be easier than it was.

I felt like nothing and I wanted to be treated like nothing. And when I made that happen, I finally woke up and realized that I am, in fact, something. And that something was what I had always been, and that it was time to shake off all of the shit that had accumulated and get back to my core.

A friend (who's also a very cute musician - just to throw that in), shared a video on FaceBook of Sara Bareilles performing her song "She Used to be Mine" from Waitress, and it hit me right in the face, because it captured what I had been feeling lately. The recreation of my true self.

And it's not what I asked for.
Sometimes life just slips in through the back door
And carves out a person
And makes you believe it's all true.
And now I've got you.
And you're not what I asked for.
If I'm honest I know I would give it all back
For a chance to start over
And rewrite an ending or two
For the girl that I knew.
Who'll be reckless just enough
Who gets hurt but
Who learns how to toughen up, when she's bruised
And gets used by a man who can't love
And then she'll get stuck and be scared
Of the life that's inside her
Growing stronger each day
'Til it finally reminds her
To fight just a little
To bring back the fire in her eyes
That's been gone but it used to be mine.
https://youtu.be/DToejUka-XU

And that fire in my eyes was gone for a long time. Other people could see it, but not me.
But, it must have been there, because I'm here. Now. A year later, and I'm amazed at what I'm creating and all of the beautiful actors and actresses that have entered the stage to perform this new piece I am writing. No longer a drama. More of a RomCom. Kind of a mix of Who's That Girl and Sleepless in Seattle or something like that, because my life requires slapstick, or it just ain't fun. And if it wins an Oscar, I'll come out of hiding, like Jodie Foster does once a decade, in an Armani suit, to accept my award. (But that's a lie, I'll really walk out in a swan dress yelling, "I guess this means you like me! You really like me!")

Until then, the fire in my eyes is glowing. I love me; I love this creation; and I love all of the people who have come and gone during the various acts. It really is true that some people only enter your life for a season. And that's OK. I have been inspired in countless ways by each of them. This whole life thing is amazing.

And now, I'm off to do karaoke. Please take a moment to pray for my audience, who will most likely be hearing my version of Nutbush City Limits.