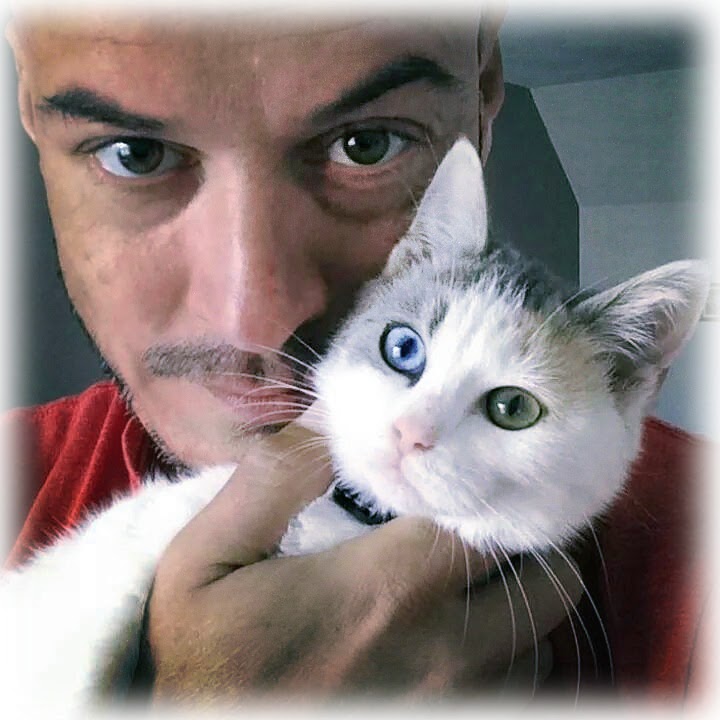 So, sometimes I get random thoughts.  And, sometimes they strike me as funny.  And sometimes I write them down. This is one of those times.  The thought?  What if it was socially acceptable for me to have a full-on, committed relationship with a cat?

Let me set the scene.  I have just come home from a long vacation, on which I met my future feline husband.  At the end of this whirlwind romance, he proposed.  And, I accepted....

"Someone's at the door."

"Hi sweetie.  Welcome home! I'm glad you made it back safely.  I was worried about your flight, because there were storms over the Atlantic.  What are you excited about?!"

"You aren't going to believe it. Is Dad still up?"

"You're right.  I can barely even think of the words to say, so I'm just going to blurt it out.  I met the most amazing creature on vacation, and...I'm engaged!!!"

"His name is Mr. Wiggles, and he is the most amazing thing ever to happen to me.  I was walking past the Teatro di San Carlo in Naples and almost tripped over him as he came running out from an alley.  At first sight, I fell in love.  He is so cute - and you know how I like furry guys!"

"That's wonderful!  But, I'm a little concerned that you're moving so quickly with this.  Do you know anything about his background?  His family?"

"Well, we did share our backgrounds at a cafe right after we met.  He was adorable - he doesn't like coffee so he just had warm milk.  He has five brothers and sisters, and believe it or not, they were all born at once! That makes them fraternal sextuplets, I guess? Anyway, he says after that, his mom was fixed, so there's just the six of them.  His father sadly ran off with some neighborhood trollop right after he was born and he never saw him again - although sometimes he says he can hear or smell him as if he's close by.  Poor little thing - I guess he has some psychic scars."

"Does he keep in touch with his mother or siblings though?"


"Unfortunately, no.  When he was young, his mother opted for assisted suicide because of a rare disease she got from eating wild birds.  And he and all of his siblings were adopted by different families and lost touch."

"Honey, I'm sure Mr. Wiggles is truly an amazing guy, and we're the last to believe that people don't deserve second chances, but remember that other guy you dated.  All of those stories about his past certainly played out with you again, didn't they, even if you didn't want to believe it?  I'm a little worried about this."

"But Mr. Wiggles is different mom!  He's just getting started in the fish business, which he thinks will be a big success. You know Naples - fish is huge there.  He was eating one of his delicious catches when I bumped into him.  He compared starting a business to a big pole or post, and that to be successful you have to scratch and claw your way to the top, and I know he can do it!  I mean, he's tenacious and so quick!  I kept trying to grab the bill at the cafe and he was so fast!  Every time I would pick it up, he would swat it out of my hand!  Such a gentleman."

"Well, I have to admit, being a gentleman is a positive trait.   But, I don't know.  I wish you'd get to know him a little better before making such major decisions."

"I knew you guys wouldn't support this!  Dad, do you remember what it was like when you fell in love with mom and you just knew it was right?  The first time she nuzzled into your neck?  The feeling of her sharp fingernails?  The way she would run to you every time you called her name, like you had some special reward for her - but that reward was you? That's what this is like.  I know what I want, and it's Mr. Wiggles.  And think of it!  In a few months, I'll be Mr. Wiggles too!  He told me that he wished he had nine lives just so he could spend them all with me!"

"Well, OK son, you sound like you've made your mind up.  When do we get to meet this Mr. Wiggles?"

"Oh no!  I totally forgot! Don't freak out, but I was so excited that I just brought him home on a whim.  He's still in the car.  He insists on flying in a crate.  I guess Italy is as tough as everyone says.  Maybe he'll relax now that he's over here in the states. Let me go get him."

"Here he is!  Oh my God, Mr. Wiggles!  Mom, Dad, I'm sorry, but let me take him upstairs first to freshen up before we make introductions.  I left him out there so long he had a little...accident.  Nothing major.  Be right back!"

"When they come back down, remember your manners.  I don't approve of this marriage at all, but  for tonight, we should avoid causing a fight - the last thing I want is anger spraying all over the house. We'll get to know Mr. Wiggles, but, honey, do me a favor, leave the back door open tonight."