Living In The Spin Cycle 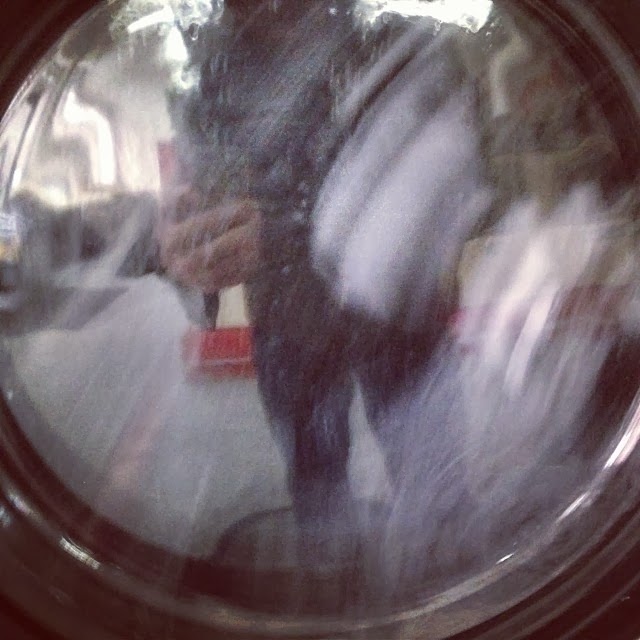 I went to the laundromat today.  It's been freezing this Winter, and I've been hibernating but, when you've finally reached the choice of wearing a mismatched sock as underwear and long johns as pants, it forces you to wake up and do what you have to do.  And what you have to do is venture out into the snow with 100 pounds of clothes (5 pounds of it your own filth) and spend several hours with complete strangers, half of whom are wearing pairless socks on their junk.  It's just one of the unfortunate facts of life.   If you're part of the elite class who has never had to frequent one of these establishments, let me describe the process.

First, you have to pick a laundromat, which is tough, because they're all disgusting if you really think too hard about it:
But there are some disgusting situations you'll put up with so that your clothes smell like your new "Tahitian Vanilla Mandarin Sunset" flavor of eco-friendly and fully organic detergent.  One is using machines where the underwear of thousands of strangers have been washed - that's the first disgusting thing you need to get over.  The second thing -- sun-faded inspirational quote posters.  Every laundromat wants you to "Reach Higher" and "Hang In There".  If you don't believe in "Teamwork", you're better off washing your clothes at the river.

Once you pick your laundromat, the next step is to get quarters, which is, in itself, a full time job.  People don't even want to give you cash change these days, much less coins.  And nobody wants to accept coins as payment.  They'll take 10 cents off the price before bothering with your nickel and 5 pennies.  But not the laundromat.  The washer I used today required that you put 2 quarters in each slot. It was the "Giant" machine, because I'm a dirty clothes hoarder, and so the excessive complexity of getting it started was probably deserved.  When you're the biggest machine in the place, you get to do whatever you want, apparently.  After only 14 attempts to get my vintage $10 bill to be accepted by the change machine, I had my coins.  Apparently cash-changing machines were invented by stage moms or sadistic nuns because, your bill must be perfect!

Step 3: Finding a machine can be dangerous.   Some scientists have reported that the only people who enjoy doing their laundry are either sociopaths, spies who are undercover as laundry-loving sociopaths, or actors playing the role of a spy who goes undercover as a sociopath who likes to do laundry.  And by "scientists", I mean me, but I'm sure many experts in the sciences would agree, being scholarly types and all.  Luckily, these laundry-loving-lunatics are rare and most of your fellow laundromat patrons are not any happier about having to transport their dirty clothes around town than you are.  What this means is that you won't see many smiling faces and, if you do, beware, because that person is nuts and may just start throwing their own shit like a monkey.

I try to find one as far away from others as possible and as big as they make them so that I can just shove everything into one bin and get straight to watching The Bachelor on the old school, dust covered TV mounted on the wall in the corner.  When something romantic happens, all your laundro-mates cheer, or boo, or squeal "how sweet!" or, like the little old lady in the corner, shout "Ay, Jesu Cristo!"

If you've chosen unwisely in step 2, your laundromat is small and busy.  This may mean waiting while the lady in the lime green polyester slacks and curlers hidden under an old grocery bag stops nagging someone named "Tommy" on her cell phone and finally pulls all of her other clean slacks out of the washer (in shades of royal blue and aubergine). Often, this process takes days, during which you must hover close enough to her to smell the mix of Giorgio and B.O. that she is emitting, just so that everyone can see that you have dibs on her machine.

Once you've secured your washer, it's time to mark your territory by looking around and glaring.  It is especially important to look pissed off and tough so that you aren't bothered.  I once saw a man lift up his leg and actually spray his machine with urine, but I think that's going a bit far.

Step 4: Deciphering the instructions takes a PHD.  These machines aren't a simple "put in the soap and hit go" maneuver.  There are multiple steps, laid out for you on a barely legible panel in four different languages.  Often the words are so faded that you find yourself following the French instructions and putting detergent in your own eye by mistake.  Play it by ear and experiment. I've tried putting in my lemon verbena-scented soap during all the different cycles and my clothes end up  smelling like the jock strap of little old Juan down the street anyway - a strange mix of cumin and bitterness.  If you figure it out, let me know.

Step 5: Scope out a cart and guard it like a pit bull.  Growl if you have to.  No matter if the laundromat is the size of Grand Central Station, they will have a maximum of 5 carts with which to ferry your wet clothes from the washer to the dryer, so finding one early is paramount.  Often, someone will try to get smart and send a helpless-looking ragamuffin of a child over to guilt you into giving yours up.  Don't fall for it.  I carry Chiclets in my pocket to throw and distract these little thieves.  Leave your compassion at the door if you want dry clothes.

Each quarter gets you approximately 5 minutes of dry time, 2 of which is "cool down", meaning your clothes are simply cuddling with each other for warmth.  I recommend visiting a costume store for a pirate's velveteen satchel in which to carry all the quarters it will take to get your wash lukewarm - it makes quite a statement.  An eye patch isn't a bad idea either.

Once your wash is dry, they will try to tempt you with folding tables.  They are always mauve and should never be viewed under a black light.  Don't use them unless you want Ebola. That's all I have to say on that subject.  Fold at home, in the warmth of your own self-pity.

And that's it - you're all done - and all it's taken is half your day and a bit of your soul.   But there is a lesson to learn about life that few experiences outside of a laundromat can teach: