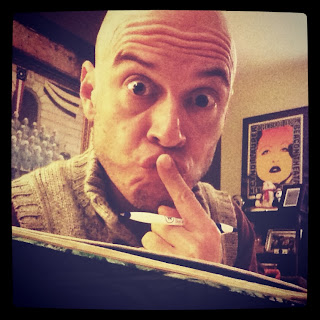 My dearest diary, I've been waiting to talk to you all day!  First, before rudely starting into today's adventures, please let me take a moment to compliment you on just how lovely you look, in all your resplendent, denim glory.  You're a feast for the eyes Shirley and, shhhhh, no one knows your real name, so let's keep it our secret!  #giggle

OK, enough about you, let's talk about me!  #attentionhog.  So much has been going on - I'm almost overwhelmed.  In fact, I brushed my teeth three times today #OCD, because the taste of being popular just wouldn't leave me!  Of course you know, Shirley, that I am being facetious, because I'm not popular #amtoo, but my dear trollop, that is only a false assumption you have of me based on yesterday, because TODAY Shirley, today, I have amassed an incredible group of followers on Twitter with all kinds of wonderful characters in their names.  I have no idea what the words on their profiles mean, but they certainly seem exotic, and they obviously love me.  I mean why else would I have all these beautiful new followers (and barely clothed, I might add #foreignershavenoshame) if not because my name is on fire in their country and is traveling from lip to lip and computer to computer like the wind?  No, seriously, I'm waiting Shirley...why?  I thought not.  #popular #toldyou #bitch.

So, obviously, Shirl, I am feeling like things are really starting to change.  I looked up the language #googletranslator and, as close as I can tell, it's Uzbek.  Uzbekistan Shirley! #readallaboutitonwikipedia.  Which means that all that stands in my way to becoming the toast of Europe are Kazakhstan, Russia, Ukraine...well, several landlocked countries, but I'm close is what I'm saying. #dontjudgeme.  And then once I displace David Hasselhoff in Germany, I think I may have a chance at actually being famous in my own country.  Think of the possibilities Shirley!  Maybe I can bring Uzbek fashion into style here! #ofcourseIcan What a boon for my brothers and sisters in Asia. #5centsanhour  And, apparently human rights are minimal there, and they grow a lot of cotton, so I could even make my own clothing line! #everyonesdoingit.  I'm so excited Shirley - this is the start of something! #sweatshop.

I don't think I'd want to move there though, do you Shirl? #clothtoiletpaper.  I mean, I think it might be better to be admired from afar, but I have time to figure that out.  I just think it would suck to have to dress up every day to be admired.  And of course I would have to get plastic surgery too. #pullmypubestomyears.  Maybe I'll visit them once a year, like the groundhog seeing its shadow, or like Jodie Foster.  #ordeadbeatdads.

OK, so I know I have more to say on that subject, but another one just jumped into my mind and I have to talk to you about it Shirl-Shirl.  #gurllistenup.  What's with people on the street and all their staring?  Somebody today looked right at my FACE! #yesisaidit  Imagine the nerve?  Right at it.  Don't they know I'm huge in Uzbekistan?  #groupies  I thought at first that they did and that the power of the world wide web had already transmitted my name across the ocean to New York - and I wondered whether I would ever get used to the attention that fame brings.  I wondered it all the way through Walgreens and almost bought four boxes of Kotex, mistaking them for Drake's Cakes! #theydprobablyworkinapinch.  Of course I gave all these barn-raised onlookers dirty looks so that they would learn their place, but later I realized I had forgotten to wear pants.  #dressingissohard.

But then, THEN - you're not going to believe what happened after. #dontcloseyourcoveronme. #bitchisaidlisten. #diariesareso1980.  #kiddingshirley. #nottho.  I attended a Bikram Yoga class for the first time.  #bacteriafactory.  Shirley, I know that you've never done it before because you're worried about your pages wrinkling from the heat #welliamatleast #oriwouldvetakenyou, so let me explain.  It's kind of like Uzbekistan (you know how they used to force their children into gymnastics and stuff for the Olympics?), this is kind of like that.  The teacher is all like #imaspiritualnazi - "You're going to bend yourself in half!  But not just in half, I want you to turn each of your limbs at 45 degree angles #likeanaccidentsurvivor from your body and kiss the back of each thigh four times, but not with your mouth.  Kiss them with the crown of your head.  We call it the Kiss of the Broken.  Don't forget to breathe...#inallthesweatsmell!"

Right?  I knew you'd understand Shirley, because you can't even open your cover without it snapping back into place from your rigid spine.  #scoliosis.  And what's more #youaintgonnabelievethis, you have to do it in a room designed to feel like a mall parking lot in Miami.  It was so hot, I grew nose hair and told everyone my name was Morty.  It actually felt really nice, and I discovered that I am really good at just collapsing in a heap on a mat. If only that was a pose, I'd be top of the class!  #icallitsleepingdragon.  In the end, I was wearing basically nothing but my underwear, sweat and broken pride, but I felt an appreciation for my health, soul and Mother Earth. #andmyinsurancecoverage.