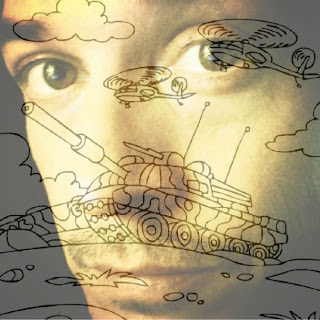 I've spent my life as a tank.  My exterior is hard and protected - ready for battle.  And my interior is the control center, scanning the environment for threats and preparing.  I've spent most of my time in this thick, armored battle station.  My goal has been to just make it safely through each danger zone without being blown up.  Force is a last resort, but I am well armed.

I climbed into this tank at a very young age.  Being painfully shy, I knew that the world was going to hurt me.  And it did.  So, I considered myself smart for having closed myself off proactively.  I can only imagine the carnage I would have suffered if I hadn't been ready.  The inside was safe and warm and I could say and be anything I wanted.  I could observe without actually seeing and hear without really listening.  The world outside was data, not information.  Inside, my mainframe was buzzing and blinking, analyzing the data and spitting out assumptions.  Dirty look + name calling = turn the tank around and head home.  Don't fight, just change course.  The tank must be saved at all costs.

No one knew I was in there.  Or at least they never indicated they did.  I'd go out into the world, dodging left and right, camouflaging myself in the details and then returning home to refuel.  At night, or on a lazy afternoon in the sun, I would sit inside the tank and think about how much I'd like to climb out.  How much I yearned for someone who I could talk to, not through the tank radio, broadcasted outside the shell on loudspeaker, but to have someone climb in with me for a chat.  I wanted a person who would look around, see the pile of dirty laundry in the corner and the gallon-sized tub of gummy bears on hand and not care.  Someone who'd appreciate how I'd decorated the interior with abstract art and photos of distant worlds that no one else could imagine.  Someone to see the sexual scene playing out on the TV and say, "oh, I think I've seen this one."  I longed for someone to have my back when I opened the hatch.  But no one could be that person.  I was the only one I trusted to know me and to hold onto my secrets.  I was the only person who always disappointed me, but the only one who was definitely safe.  I certainly couldn't abandon myself -- and that was comfort.

It became excessive, then obsessive, then habit.  I was a sensitive, smart, creative gay boy living in a world that did not like him and often wanted to hurt him.  But I sat in a tank that was tough, witty, heterosexual and able to return fire.  Inside I could relax my arms naturally.  Outside, I had to arrange my cannons in a specific way to avoid persecution.

But, as I got older, I learned that people didn't really like the tank either.  My steel-plated sides and the arsenal I had amassed to gain the friendship and acceptance I needed so badly were now having the opposite effect.  What had changed?  Who had changed?   Me?  The world?  I guess everyone else had grown and moved on while I was still fighting the battle.  I was a soldier who didn't know that the war was over.  Humor was now viewed as jaded sarcasm.  Kindness was seen as needy and distrustful.  Intelligence was received as condescension.  I had gone too far.  What next?  The facade and the original had become so intertwined that there was no telling what was real and what was decoration.  I couldn't live in the deception and fix it at the same time.

Over the past decade, I had started planning my escape.  Nothing crazy at first, just scribbled notes and diagrams on napkins of how to unlock the hatch.  Then a drawing of my head peaking out and breathing fresh air for the first time.  Just images and thoughts.  No actions.  Not yet.  I would be too vulnerable - my skin too thin and delicate from years out of the sun.  My head was too filled with plans and schematics showing in clear detail the risks and the impending chaos I would face. Because leaving this tank would not be the end of a war, but the beginning of combat.

I was married.  Had nieces and nephews.  A goddaughter.  A house.  A mortgage.  Two cars.  A job that paid my bills.  Other jobs I did for other people, to feel needed and to avoid doing any of the real work.  Friendships.  Colleagues.  Family.  All would soon find out they weren't right.  Whether that meant they weren't right about who they thought I was, or that they weren't right in the sense that I had no business having them. I was entangled.

Even though encased in thick, opaque metal, I was sure that everyone could see me.   See my mess and that I wasn't really a threat at all.  How easy it would be to defeat me.  How all my defenses meant an equal number of vulnerabilities to exploit.  All they needed was a mirror.  A simple reflection of me to blind my visibility and my sensors.

Sometimes our environment changes and sometimes we do.  Either way, when our primary focus is protection, we can easily miss the moment and wake up one day to see that people are looking at us funny.  We think we don't understand them - can't interpret them - but it is they that cannot interpret us. They have no idea why we're reacting to them in ways that don't seem to apply about scenarios that don't exist.  They've become unwilling players in a one act play we starred in sometime in the 80s, and they don't like it.  We decide that they're just like everyone else that hurt us - but never consider that they might be like the angels in our lives that helped us to deal with those same assholes. Staying on the inside blinds us, not from listening to the people around us (because that provides more data for analysis), but from actually hearing them and getting to know them authentically. And that was what I wanted.  Authenticity - a real life where I write the script as I go, not lazily rehashing old episodes of some tired drama.

So, a few years ago, I opened the tank and came out.  And chaos did erupt.  And every vulnerability was exploited.  And it hurt.  But it was real.  And, through that pain, I discovered that I still had my armor.  I didn't discard the tank, I melded with it.  And through that intermixing of flesh and circuitry, I grew far stronger than any ton of metal or spray of bullets. I continue to recode my operating system to handle the incorporation of body and machine, but I've been upgraded nonetheless.

To quote Emperor Palpatine in Return of the Jedi, "Now witness the power of this fully armed and operational battle station."
Email Post