A Fight, a Flood and the Hair of One Bolivian 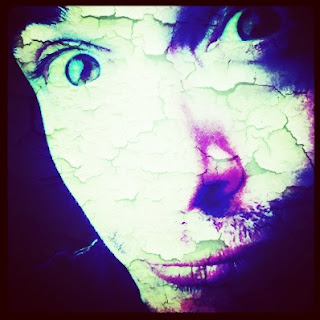 I'm not sure what I dreamt about Saturday night, but I woke up Sunday like a cat thrown into water.  I walked around a bit, shaking my paws to dry off, but as soon as another human came into sight, I hissed and made a whole foolish show of how displeased I was.  Those of you who have been following my blog know that I have been trying to quit smoking lately, with mixed success.  Let's just say the small argument that followed my feline antics was ended with the quote "I'll pick you up your smokes when I'm out."  The lack of combustible nicotine was not the cause of my needless episode, but it certainly did help make it all better as the first, warm tug of smoke filled my lungs.

Dramatics.  Exaggerations.  Tearful discussions about feelings, change, loss and overwhelmed panic - it's how God intended his holy day to be observed.  Luckily, my fit of silliness was fairly light and, I've been told, I look like a cute anime character when I'm angry, so to set your minds at ease, I'm still happily coupled with one cat and a reserved parking spot, and all is fine.

But, just as the argument ended, the flood began.  From the kitchen, I hear, "Ummm, babe, come in here."

"Just come in here and look at this."

That certainly can't be good, I thought.  So, I went to the kitchen in the lackadaisical manner in which I handle all emergencies.  Your rabbit could have just had its paw chewed off by a Doberman and I'd likely say, "It's OK, I've seen this before.  Just get me some string, a woman's gardening glove and two paper clips.  We'll make Fluffy a prosthetic in no time!"

But, when I got there, it was pretty much as bad as he'd said.  Water was literally running from the kitchen light fixture. Then we realized we don't have any buckets to catch the water.  Funny how you have 14 cans of tomato sauce, duct tape to wrap around your ankles when you're wearing new boots and don't want blisters, three different types of moisturizers, several Buddha statues, but no buckets.  So, we grabbed a bowl designed for Chex mix and popcorn covered with little cartoon icons of movie snacks, and an old Tupperware and placed them under the light, catching about half of the falling water. Later, I remembered the recycling bin we keep under the sink and we added it to the mix.

What to do? What to do?  Oh, yeah, we live in an apartment building - let's go find the Super.  He's at church? He doesn't seem like the religious type. Hell, he doesn't even seem like the polite type.  But, he's at church, and apparently it's a really long service. So, there we are collecting water like two jungle people catching dew drops off leaves to save for the dry season. After awhile, we just pretended it was a Zen garden, and sat in the dining area relaxing to the sound of falling drops in our three buckets.  Blip, drip, blop.  Drop, blip, drap. If only we'd had some sand to throw on the floor and a little bamboo rake, I might've put on a pair of sweats and done some Tai Chi.

As I avoided being hit by the yellowish water that was coming from who knows where upstairs (I tried not to think about it, because if it was toilet water, there was a lot of packing to do for our immediate abandonment of the apartment), I noticed another drip - this time from the wall switch.  Then, another drip running down the kitchen window.  Our Zen garden had become a real water feature and it took all our effort to not throw in pennies and make wishes.

The Super still wasn't home, so I went upstairs to see if the couple above us were in.  Maybe they'd left the water running. They didn't answer.  Later, I saw the male half of the couple us carrying freshly cleaned car floor mats out the front door of the building.  I was immediately convinced that he had killed his girlfriend and the the flood was coming from his attempts to clean up the evidence. They fought all the time, so I didn't even consider it a maybe kind of scenario - it was a certainty.  Joe and I waited to see if the water turned pink as it dripped through the ceiling, feeling like Jimmy Stewart in Rear Window.

After our fifteenth time knocking on the Super's door, he answered and came to look.  As he watched water running from every crevice of our kitchen, he said "I'll call a plumber - they will come look tomorrow."

"Tomorrow?  Are you sure?  Did you see that it's coming from the light and the switch?  Isn't that an electrical hazard?"

"It's fine, just don't use the switch."  Aww, thanks. That sounds accurate and safe. You're a real comfort.

Four voicemails to the building emergency hotline resulted in four voicemails to the building emergency hotline.  A note to other residents of our building: If you have an emergency, I suggest you write your issue on a piece of paper, put it in an old wine bottle, throw it in the ocean and wait for help. It seems to be the more reliable approach and I just wanted to share the idea, because that's how I am - always a helper.

Oh, the part I forgot to mention is that we'd invited a friend (who happens to be a professional chef) over for dinner. So, in the midst of the mini-rainstorm happening in the kitchen, Joe was making a meat sauce.  I chopped on one side, while he stirred on the other, both avoiding the waterfall that was dead center in our tiny kitchen and doing our best to keep the bourbon colored water from landing in our drawers whenever we needed a utensil.

The Super, who'd said an hour before that he'd be back with buckets, had decided that a nice Sunday nap was a better idea, but I went back one more time to tell him that paint was bubbling off the walls and ceiling as it was filled with pockets of water. "You can't get a plumber on Sunday. It's impossible." was his reply.  Impossible? I guess it's one of the remaining puzzles that need to be solved.  Perhaps there is a team of Swedish scientists working on this issue and hoping to free plumbers everywhere from the invisible force field that keeps them homebound on Sundays.  Please pray they find a solution soon and thank your stars you didn't become a plumber. This is serious stuff.

In the hall, I ran into a wee man from upstairs, who looks like Stuart Little, but with a cane and a mustache that makes him seem a perfect fit for the villain in a western movie.  He said that when the Super turned off the water to his kitchen, it made his apartment fill up with sewer gas, causing his fiancee, who apparently has multiple allergies, including one to marijuana smoke (even if it comes from five floors down, which he specified) to gag and cough. I pretended that I had no idea what pot was, smiled, nodded and backed away into the elevator, which thankfully closed.

As the Super was trying another valve, to stop the little rat man's fiancee from sputtering away with her allergies (if indeed a fiancee does exist, which I kind of doubt), Daisy, our dinner guest, arrived. She has a lot of faith in us, to see this scene and still eat food from our kitchen, but I think she figures if you're going to die of food poisoning, our apartment is a pretty fun place to do it. And, it smelled delicious, but that's what happens when you cook in a zen garden. Relaxation breeds flavor, or so I believe Confucius said.  Either Confucius or Rachael Ray, but it includes too many SAT words to be Rachael, so I assume I was correct with Confucius. It doesn't really matter.  It's a bullshit saying that I just made up and I'm trying to make it sound official, OK?

Over dinner, our conversation turned from how we cry over Les Miserables, to pig noses, Brazilian male asses and then to 50 Shades of Grey and all the spinoff books coming out.  That conversation morphed into one about Anne Rice's Sleeping Beauty series, and the characters that were supposed to emulate ponies, with butt plug tails and then to the fact that Bolivians are prized for their hair and often sell it for hair pieces. That last part I'd never heard, but I was fascinated. Apparently, Bolivia is just a giant hair farm for Latin America. Who knew? I have a Bolivian hair piece on order. It should be here in two weeks.  It's a 60's business man style, with a harsh part on the left and from the literature, you can even swim in it. I'm so excited.