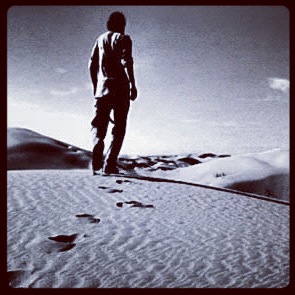 Recently, I asked my friends on Facebook to submit a caption for the photo above.  A number of people submitted and I loved them all.  Some were funny, others insightful.  I selfishly picked one that was not only great, but spoke to my life.  The quote is from Lisa Bryant Pielocik, my aunt from Roanoke, VA.  Here is her submission:

"I wasn't sure if I was walking away from what had been or toward what was to come
but I at least I was moving."

There are times in life where you're in between two places. I've been there for awhile.  If we look for ways to better ourselves, to be true to what we're here in this life to do, it's bound to happen - we're going to discover that change is necessary.   Whatever the discovery is, it has the potential to alter our entire perception of our situation and, suddenly, we're straddling a chasm between who we were right before that moment and who we are after.

Someone said to me about a year ago, "if you change one thing, change everything."  I think that makes sense, but is better stated as "if one thing changes, everything changes."  It's like the butterfly effect.  Just as the flutter of a wing can start a current that blows around the globe, one fundamental alteration in the way you view your world ripples throughout your entire reality.

In my case, the big change was separating from a marriage to be who I really am - a gay man.  That decision not only changed my relationship with my ex-wife, her family, my family and our friends, it fundamentally changed my relationship with myself.  I immediately felt happier. It was as if a portion of my personality was now free to express itself fully for the first time.  I could be a better friend to those around me and was excited about experiencing everything from this new perspective.  But, at the same time, everything around me was completely foreign.

I had to establish who I was now with everyone I knew, and who they were to me.  They felt as if the person they'd know for years was a stranger, and I barely recognized myself either.  I was forced to attempt to bridge everything I had been with who I was and wanted to be going forward.  In the process, I learned that relationships are often based solely on the role you play in life. I was a husband, a son-in-law, a brother-in-law and an uncle.  As a gay man, I no longer fit into those roles and I learned that my value as an individual was far smaller than I'd thought.  If we were all a puzzle, I was that piece that you try to shove into place but you know doesn't fit.  So, you set it aside until you figure out where it goes.  When it comes to my old life, I'm still sitting on the edge of a metaphorical card table, waiting to find my place.  Maybe I'll end up being the ear of the cute little kitten on the box cover, or maybe I'm part of a mountain from a totally different puzzle, put away in the wrong box.

My perspective on work also changed.  Everything I'd strived for, the attitudes I put up with, the extra hours I put in, were all sacrifices I made to support a relationship and a life that I was no longer a part of.  I realized how I had stayed in a career that was completely incongruous with my dreams and my education in order to make others happy - and in order to be the person I tried to be rather than the one I am.  Let's just say that bosses don't really give a shit if you're having a hard time, no matter what they say.  Corporate America is highly skilled in false generosity - if you're not performing up to your usual superhuman capabilities, you'll soon be replaced with someone making fifteen cents an hour named Habeeb.  It hasn't happened yet, but I'm learning Hindi. Maybe Habeeb will need an assistant?

While all of that was happening, I was exploring what it meant to be me and catching up on a lot that I'd missed out on in denying myself my identity.  In the process, I ended up meeting a lot of great people - and some really horrible ones.  I was so disappointed at the less than warm welcome I got from some in the gay community, that there were several moments where I felt like saying "Just kidding!  I'm not gay!  You didn't know I was joking?" and going back to my old life, because at least it was familiar and safe.  I understood that those who did not have the struggles I had in coming out looked at me as weak (and in fact I admired and was jealous of their strength), but I didn't understand how a group that's discriminated against, like the gay community, would find it appropriate to discriminate against one of their own.  I guess we're no better than any other group, and as judgmental as the rest.  Like everything in life though, that too settled itself out and I found the support I needed, maintained my strength and soldiered on.

I met JD almost a year ago and we clicked right away.  If you've ever heard of the concept of twin souls - two halves of a soul being separated at creation, each possessing different strengths and weaknesses that, when put together, create a beautiful whole - well, that's us.  We're incredibly different, but compliment each other perfectly.  When I'm spastic and out of my mind, he's calm and vice versa.  Whereas I prefer the diplomatic approach, he is more direct.  I cuddle the cat.  He plays with her. I make Mexican, he makes Italian.  I drive down roads, he drives up trees. It's very balanced.

When we met, I had persevered through several bad attempts at relationships, and was ready to just put on a red robe and enter a buddhist monastery.  My hair was already shaved, so it seemed appropriate and very convenient, plus it removed the need to search for a man who wasn't a serial killer, a self-centered egotist or just plain stupid.  I'd met most of those types living in New York already, so I should have assumed my plans for monk living were premature - the right one was bound to come along soon.  As those tricky bitch fates would have it, it was sooner than I'd expected.  I'd wanted to meet someone so badly that I'd forgotten how broken I still was.  I was trying to figure out whether any of my past life would survive my recently announced gayness, determine whether I could stand going into my job one more day and building a new, and very happy, relationship at the same time. Changes were happening in me daily and I felt insane.  Well, more insane than usual.

I realized that what was holding me back in all these cases was my inability to see any worth in myself.  It's a difficult thing to explain, but you can realize that you're talented and attractive and funny and all that shit, but still feel totally plain and generic - a dime-a-dozen kind of guy who could easily be passed over for someone more exciting.  Finding myself in a really healthy relationship was a catalyst for a chemical reaction which brought all those insecurities and fears to the surface.  When I had no one I wanted to be my best self for, it was easy.  When I found that person, I realized I'd arrived at the battle of Gettysburg with a rubber chicken in my hand - I was badly unprepared for dealing with myself.

Luckily some things in life are stronger than our issues and one of those is love.  Not co-dependant love, but true love - unconditional love.  It can see past weaknesses to the core of a person; to who they are at their best and what their true intentions are.  It doesn't just come from romantic relationships, it can come from family and friends and sometimes the unusual acquaintance that the universe just sends your way to support you.  I have been incredibly blessed to find unconditional love in all those places.

So, am I moving away from what has been, or toward what is to come?  I prefer to think it's neither.  I'm just walking towards me.  Sometimes our path to truth and happiness hurts others, but if that's not our intent, it's OK.  We can't control how other people feel.  Sometimes our path seems blocked by obstacles and pitfalls, and we don't think we'll have the strength to take another step. But we do with the help of that little warm feeling we get  in the center of our chest when our desires match those that the universe has in store for us.  We do it with the power of a smile that won't go away.  We climb over rocks and downed tree limbs by taking the hands of those who offer to help. We don't do any of it with hate or disdain for others, but from love for ourselves.  And at some point, we'll see that there is no life behind us or before us, it's just life and it's all around us and all of it, the good and the bad, the healing and the painful, are beautiful.
Email Post