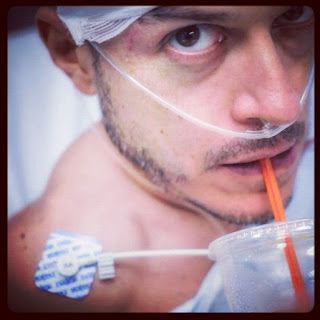 I had a horn removed today. It wasn't really a horn at all, but I told everyone it was.  Then again, no one believed me. They could see it was just a silly old cyst. For some reason, even though it was just a tiny little thing, it made me feel ugly, as if the rest of my face was tainted by the faint shadow cast by this pea-sized nodule.  My brain would argue with itself as I looked in the bathroom mirror.   "You're more than just what you look like.  And besides, the people you'd want in your life don't judge you by these things," one side of my brain would say, compassionately.  The other side just shouted in horror, "Ugh, a horn! There's a man with a horn in my apartment!  Oh...that's me."

So, I had it removed.  And I don't want to get into politics, but thank God someone is leading the fight against ObamaCare because our current medical system is incredibly efficient and should not be altered in any way.   I mean, in what other country could I get a cyst diagnosed with only three visits to three different doctors?  How amazing is that?  I mean, in Sweden, I bet they make you go to five.  I also really appreciated the four hours I spent wearing a backless robe in a forty degree room prior to my pre-scheduled surgery.  I had no idea that our nation's hospitals espoused Buddhism, but I think a little suffering is good for the soul and I feel I had almost reached enlightenment by the time my IV was painfully inserted and then accidentally taped to my gown.  When they lost my clothes post-surgery, I could feel the love as they ensured I spent ample time relaxing and recovering. Nope, nothing to fix here!

But enough about that, the important thing is that the horn is gone. I'd gotten it from a fall I had on Easter. It's a long story, but I was doing some volunteer work at a local park and attempted to jump over a fence, resulting in a giant gash next to my eye. The cyst developed later from the impact. And let me tell you that there's nothing like falling gracelessly on a major holiday and then getting a horn to ensure you have a constant reminder of it. Maybe God was mad I was late for dinner?

Looking back, it's funny that I called it a horn, because it is so symbolic of where I had been in life.  You see, animals developed horns through evolution for protection - to fight - and to impress - for mating.  The virtual "horns" I had developed, symbolized by this ugly cyst, were for the same purpose.  I'd spent a lifetime growing and sharpening a very powerful set of "horns" to fend off bullies, untrustworthy people, narcissists and, honestly, myself.  The rack sprouting out of my head like a proud buck's included boney spines called "humor", "intelligence", "condescension", "distrust", "rebellion" and "fear".  I used each like a weapon to ensure that no one ever got close enough to me to pet my cute little deer head, because, if they did, they might see that I was covered with wounds and imperfections, or they might try to carve me up for some horrible venison meal.  The horns protected me, but they not only kept me away from threats, they prevented me from receiving love, which was all around me.  But, I was too busy preparing for battle.

Then, this past year, I met the person who I think is the other half to my soul. He had horns too, and we spent some time circling the watering hole, brandishing our weapons and pawing at the ground, demonstrating to each other that we were uncomfortable and prepared to defend ourselves.  Eventually, we realized we didn't need our horns, other than to protect one another, and that there was a great forest around us that we could explore together without fear. We stopped circling and created a little den together where we eat wild strawberries to this day.

When your life has felt like one long fight-or-flight moment, letting down your guard is difficult.  Sometimes a strange sound or a misinterpreted word can still bring me to high alert.  But, I've realized that living that way is very tiring and extremely unfulfilling.  In order to grow, you need to be brave enough to walk right up to new things and investigate them...not from afar, behind a set of horns...but up close and personal.

I grew a real horn to remind me of that.  And I had it removed, because it makes me a more beautiful person, inside and out.
Email Post