The Lord of the Dance 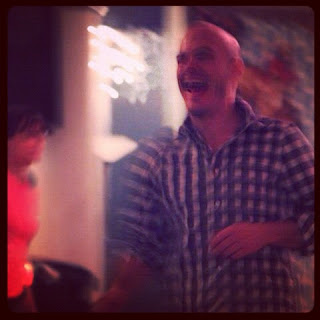 One of my favorite places in the world to eat is Big Daddy's in Massapequa on Long Island. It's a low-key little Cajun dive in the midst of strip malls and overshadowed by the Long Island Railroad and Kohls. A strange little haven in the midst of suburbia where you can stand on your chair and shout at your table and order moonshine.  It's the kind of place that makes me feel like I'm getting an exotic look into American culture in a place where it shouldn't be - which somehow makes it more eccentric and interesting.  I mean, how many places can you go to get a chicken fried steak just moments from where Vinnie is making out with Tina in his Monte Carlo SS with the tricked out rims? It's magical.

Well, I found another place like it.  Saturday night is two-stepping night at the Big Apple Ranch. In the heart of Chelsea is a 5th floor dance hall, which was likely formerly an actual dance studio, or possible a strip club  - mirrored walls can be indicative of both seedy and elevated, strangely enough - and every weekend they host what can only be a major city phenomenon: a gay and lesbian two-stepping, line dancing, cowboy-boot-wearing, buy your drinks with tickets at the door, strangely like several weddings I've been to, overall-wearing (and strangely purist) extravaganza of southern culture.  I felt like I was at my 8th grade formal, except I was being asked to dance, which most definitely didn't happen to me in middle school.  I would love to say I was the Ducky of my 13 year-old world, but I couldn't even claim to have had his funky hair or an off-beat sense of style - just the wit and dorkiness.  But at the Big Apple Ranch, my dance card was full and - lest I break two-stepping etiquette (a code I was soundly denounced for having side-stepped by my friend Jimmy upon my first turn-down of a dance invitation, which apparently is just NOT done) - I accepted every request for a spin around the floor.  I was just happy to have someone who knew what they were doing, because I bumped into the support columns of the room several times when I was trying to make this thing work for myself.


We started by learning a line dance called The Lord of the Dance.  I was hoping for a festive head band and lots of hopping around in spandex but, alas, no costumes were handed out - not even those funny blond wigs the girl celtic dancers wear.  It involved about 96 steps, which we were taught 3 steps at a time, so by the time you got to steps 9 through 12, you'd obviously forgotten steps 1-8, which made for incredibly embarrassing moments, set to flutes and drums. After a half an hour, I thought I had the routine down, except for the turns, which were either 360 degree, 270 or 180, so I just spun feverishly and then tried to stop, facing the same direction as everyone else...and it seemed to work out fine.


What struck me the most was the purity of it all.  This wasn't some attempt to "fake" country, or some meat market disguising itself as a saloon.  The people who attended, whether in cowboy boots and belt buckles or skinny jeans and sneakers, took the dance itself seriously.  They recognized that, as simple as it looked, this was a complex set of motions that took practice, dedication and a respect for form.  There was a sense of innocence and old-world respect in that room and it was absolutely charming.  After a few hours, they asked all of us "newbies" to gather together to learn the barn dance - a group dance that has partners changing partners, doing a couple of spins, kicking feet and moving on and is designed to get everyone up and dancing.  Joe and I actually figured this one out, somewhat redeeming ourselves for the pitiful latin-inspired two-stepping and "Lord of the Un-dance" moves we'd displayed earlier.  Everyone participated and one couple after another, we danced together and said "thank you" to each partner like our mothers taught us.


And, looking back it at, I see the entire experience as a metaphor for life.  Like New York, it is exciting, but also incredibly complex.  Walking down the street of your days can be fraught with peril or full of unexpected delights. A leisurely stroll can end in a fatal hit and run, a smile from a stranger, a chance meeting with a friend or a pigeon shitting on your head.  What is definitely certain is that your only defense in this world is your street smarts - what you've learned from the mistakes you and others have made.  Forget that and you're likely to fall into a manhole, accept every flyer someone hands you or accidentally walk into the door of the American Girl store and spend hours running, screaming from the scary doll stares trying to find your way back to reality.  It's easy to fall down, take bad advice or go insane if you don't pay attention.


And like a good cajun dive in the suburbs or a gay country bar - life is full of surprises and it takes all kinds of people and all kinds of opinions and beliefs to make up this strange sphere we walk around on (sideways mind you, because we're actually on the side of the Earth, not on top.) And when you find those unexpected and beautiful things in life, you should accept every dance invitation and let somebody spin you around for a bit to see things from another perspective.


And most of all, respect the process of life.  The rhythm of the two-step is "quick-quick, slow-slow." It sounds simple - two quick steps and then two slow ones - but there is a unexpected sophistication to the way it's performed. Assume it's easy and you'll look like you're walking backwards doing the salsa instead of gracefully stepping and twirling.  Life moves really fast sometimes and then slows down for a bit.  But you know what?  It always takes those two quick steps forward again and progresses around the circle. Work on your form, remember to make your own stand by pushing firmly against the shoulder of those you meet, while reaching around and grasping their should blade to remind them that you see them and recognize their value.  Learn from your missteps - don't let them keep you from dancing.  And for God's sake, be polite! It's the first thing we learn in life and we all forget it way too often.


I've recently had what are undoubtedly the toughest 18 months of my entire life and sometimes, by the time I'd gotten to steps 9-12 of handling it, I felt I'd forgotten steps 1-8. Like new dances, each new life experience takes practice to master.  But, within the span of those days I've learned more, felt more, loved more, shouted louder and danced more freely than I ever had in the preceding 36 years.  I've welcomed new people into my life, have been more grateful for the kindness of old friends and have been putting all my focus on my next steps so that I'm ready for the quick-quick part of the motion.  Big Apple Ranch reminded me that there are still things in the world that are pure and old-fashioned and orderly, and we keep these things around because they remind us of who we are and how we should be in this dance called life.


I don't know about you, but I plan on becoming the Lord of the Dance.
Email Post